Scorecard: How are Nebraska’s biggest public companies performing in the stock market? 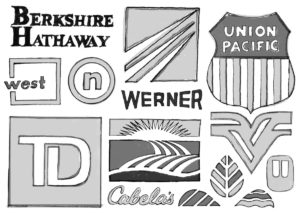 Halfway through 2017, only two of Nebraska’s big publicly traded companies have outpaced the broader stock market.

Ag-irrigation and road infrastructure company Lindsay Corp. has more than doubled the almost 9 percent gain in Standard & Poor’s 500 index so far this year. And Omaha-based trucker Werner Enterprises has beaten the S&P 500 benchmark by a few percentage points.

But none of the others in Nebraska’s largest dozen has managed the same.
“Taking what the market has done year-to-date into consideration, depending on what company you were allocated to in the Cornhusker State, you either fared relatively well or are questioning whether home cooking is best for your portfolio,” said Mark Matthews, an analyst at Omaha adviser CLS Investments.

Part of the equation is that Nebraska isn’t swimming in high-tech, Internet-oriented and digital communications companies that are leading the market. Commodity-centered, financial-industry and basic meat-and-potatoes companies that call Nebraska home have had great runs in recent years, and are viewed as “fully valued” by many investors, meaning it will take some bright new catalyst to move them far forward again.

“The S&P 500 has done a lot better so far this year than the average performance of the Nebraska stocks,” said Ted Bridges, head man at Omaha’s Bridges Asset Management, which supervises about $1.8 billion. “That might be because technology has been the best performing equity market sector during the first half of 2017, and there is not much tech representation among local companies, which have a much more industrial and financial services flavor.”

Lindsay, based in Omaha, had climbed 18.91 percent as of late last week. The company, along with larger Omaha rival Valmont Industries, whose shares have risen 7.2 percent so far this year, has benefited from overall good feelings about the ag machinery industry, Matthews said.

The companies make farm irrigation systems and are basically an investment in ag productivity and an increase in farm output worldwide, with exports to developing nations major revenue sources.

“The outperformance relative to the S&P is driven by optimism surrounding the demand for efficient agricultural irrigation and water use driven by population growth,” Matthews said.

For the three months ended in May, sales at Lindsay rose 7 percent to $152 million and profit 14 percent to about $11 million. Chief Executive Rick Parod told investors last month in an earnings announcement that the results “reflect a level of stabilization in the U.S. irrigation equipment market, a continued recovery in Brazil and increased project activity in developing international markets.”

At Valmont, first-quarter sales rose in both the irrigation unit and the ones making and selling products such as utility poles, with overall revenue up 7 percent to $637 million and profit up 18 percent to about $39 million. The company told investors in April that sales rose in all categories on improved demand.

Shares of Werner, also of Omaha, have risen 10.76 percent on improved demand in the trucking business, which is still working out a surplus of space and equipment amid difficulty raising rates charged to shippers. But bright spots are emerging. The American Trucking Association tonnage index rose 6.5 percent in May, from a 1.5 percent drop in April.

And the index was up almost 5 percent from a year earlier, the biggest year-over-year increase since November. Trucks carry 70 percent of the country’s freight, and trucking association economist Bob Costello said last month the gain squares with “anecdotal reports I’ve been hearing from fleets.”

And Werner, among the top five national truckers, has a big one of about 7,000 trucks. The company said in April that first-quarter sales ticked up 4 percent to $501 million, but profit fell 20 percent to $16 million. Although demand was weak for the quarter at large, trends improved in March and April, the company said, foreshadowing the ATA report on May volumes.

Union Pacific, the Omaha-based freight railroad, is up 4.41 percent. While the shares have lagged the broader market year-to-date, they are up 46 percent since the February 2016 lows, versus 34 percent for the S&P 500.

“We believe Union Pacific is very well managed, and is well positioned over the next five to 10 years to grow earnings and free cash flow at above-average rates,” said Bridges, whose company owns U.P. shares. “Union Pacific would benefit from an improvement in energy prices and an uptick in gross domestic product going forward, but has proven over the past decade that it can generate solid financial performance even without strong economic conditions.”

Shares of Berkshire Hathaway, the conglomerate based in Omaha and run by Chairman and Chief Executive Warren Buffett, have risen 5.48 percent.

“Berkshire lagged the broader market during the first half, but we are unconcerned,” said Bridges, whose company owns shares in the operator of dozens of subsidiaries in insurance, manufacturing, retailing and heavy industry. “In our view the company remains attractively valued, has exposure to a broad range of economic sectors, generates large amounts of free cash flow, and has superior capital allocation talent to reinvest their free cash flow.”

Bridges said Berkshire, which has more than doubled the annual compound return of the S&P 500 since 1965, will benefit from higher interest rates, which he expects the Federal Reserve to keep increasing. The company’s insurance units generate mountains for cash that can be invested pending payout of claims, a specialty of Buffett and lieutenants Todd Combs and Ted Weschler.

TD Ameritrade’s stock has climbed 2.32 percent, as the largest online stock broker digests its largest acquisition: the $4 billion purchase last year of St. Louis-based rival Scottrade. The industry is also in a shakeout, with only TD Ameritrade and rivals Charles Schwab and ETrade left standing among the giants.

ETrade, the smallest of the bunch, appears ready for action one way or another, with the board this year ordering its CEO to define its role in the world once and for all or sell the company outright.
Part of the issue facing online brokerages has been the gradual slashing of commissions. TD Ameritrade is now at $6.95, its rivals at $4.95.

Higher interest rates, which brokerages charge to customers who borrow and which add to TD Ameritrade earnings via its deposit agreement with Canada’s TD Bank, haven’t come as fast as anticipated to compensate for the lower commissions, said CLS analyst Matthews. He cited “fierce price competition” industrywide and “modest” income from lending to investors due to the small and slow rate increases.

Cabela’s stock has climbed nearly 2 percent. The Sidney-based outdoor retailer agreed last year to be bought by rival Bass Pro Shops. When finalized, the sale will remove shares from the rolls of the publicly traded.

Shares of West Corp., another company facing an end to being publicly traded, have dropped 5.86 percent. The provider of telephone conference calls and other telecommunications services has been facing several years of declining rates it can charge. The company agreed to be taken private this year in a $2 billion buyout by hedge fund Apollo Global Management.

Nelnet shares have fallen 7.65 percent. The Lincoln-based owner of $25 billion worth of student loans and payment collector for other loan owners said in May that first quarter net interest income fell 24 percent to $77 million.

With a new presidential administration, education policy has had a question mark over it: Discussion over student loans, school choice and other issues could end up being favorable for Nelnet, but the uncertainty until policies are hammered out could be weighing on the stock in the meantime, some stock analysts have noted.

Conagra Brands is down 11.73 percent. The Chicago-based maker of grocery staples such as Chef Boyardee canned pasta and Healthy Choice entrees is shedding low-margin businesses such as wholesale spices and cooking oil and ending cheap grocery promotions such as 10 frozen dinners for $10.

But the efficiencies wrought by CEO Sean Connolly, who moved the company headquarters last year from its home in Omaha since 1922, appear to be already factored in by investors, who now want to know what the company is doing to get people to choose Conagra products in the crowded grocery aisle.
It’s not easy. While profit margins are improved at Conagra under Connolly, sales themselves are a struggle for most big grocery makers: For fiscal year 2017 ending in June, sales at Conagra fell about 10 percent. The company expects sales gains of 2 percent at the most for the current fiscal year from its roster of staples such as Slim Jim meat snacks and Peter Pan peanut butter.

But the company is optimistic on new products, big on the trend toward packing frozen food in bowls, saying 2018 will see the debut of several bowl-oriented products, such as Power Bowls meat-and-vegetable entrees. Conagra has said it still employs more than 1,200 office workers in Omaha, about 800 in a Council Bluffs frozen food plant and 100 at a candied popcorn plant in Lincoln.

Shares of teen apparel retailer The Buckle have dropped 21.93 percent. The news is not good in the mall-based specialty retailer segment, said Matthews, “with sector issues as brick-and-mortar retailers have suffered from less foot traffic, discounted prices eating at margins, and stagnant consumer spending.”
Sales in 2016 at the Kearney-based operator of 462 stores fell 13 percent to $974.9 million. More recently, the company said June sales at stores open at least a year fell 5.8 percent from the same period a year earlier.

The stock of Green Plains, the Omaha-based producer of corn-based ethanol, has decreased 28.55 percent. Dependent on the profitable intersection of corn purchase prices and ethanol selling prices, the company had a $6.6 million loss on ethanol production in the first quarter. The second-largest U.S. producer, Green Plains is attempting to diversify, now operating cattle feedlots and a vinegar production business. Both utilize the corn, ethanol or ethanol byproducts the company specializes in acquiring and trading.

Consensus for the second half of the year in the broader stock market seems to favor the view that volatility — or widely swinging stock prices — will increase.

Scott Kubie, a senior investment strategist at Omaha’s Carson Wealth Management, which has $8 billion worth of assets under supervision, said the first half of the year “made investors complacent and perhaps a little greedy,” with a near-10 percent bump in the S&P 500 coupled with low volatility.

“Underneath the calm surface we see greater risks than in recent years,” Kubie said. “Valuations on some stocks are getting stretched and the smoothing effect of low interest rates continues to be gradually withdrawn by the Federal Reserve.”

Kubie said “sharp downturns can’t be ruled out.” Likewise, Bridges expects “increasing volatility over the second half of the year,” and into 2018.